In an interview with Adam Bryant of the New York Times, Charles Schwab CEO Walt Bettinger shared a lesson he learned in college during a business strategy final exam.  Bettinger needed to ace the test so he could graduate with a 4.0.  He spent hours reviewing formulas and case studies.  On the day of the exam, his professor handed out just one sheet of paper and asked the class to turn it over.   It was blank.  He explained, “I’ve taught you everything I can teach you about business in the last 10 weeks, but… the most important question is this: What’s the name of the lady who cleans this building?” Bettinger was stunned.  It was the only test he ever failed.

He told Bryant, “…I got the B I deserved. Her name was Dottie, and I didn’t know Dottie. I’d seen her, but I’d never taken the time to ask her name. I’ve tried to know every Dottie I’ve worked with ever since.”  The experience taught him “…you should never lose sight of people who do the real work.”  Bettinger’s lesson in humility impressed me.  By revealing his failure to Bryant, he chose to be vulnerable.  Instead of pounding his chest in the interview, he opened his heart. 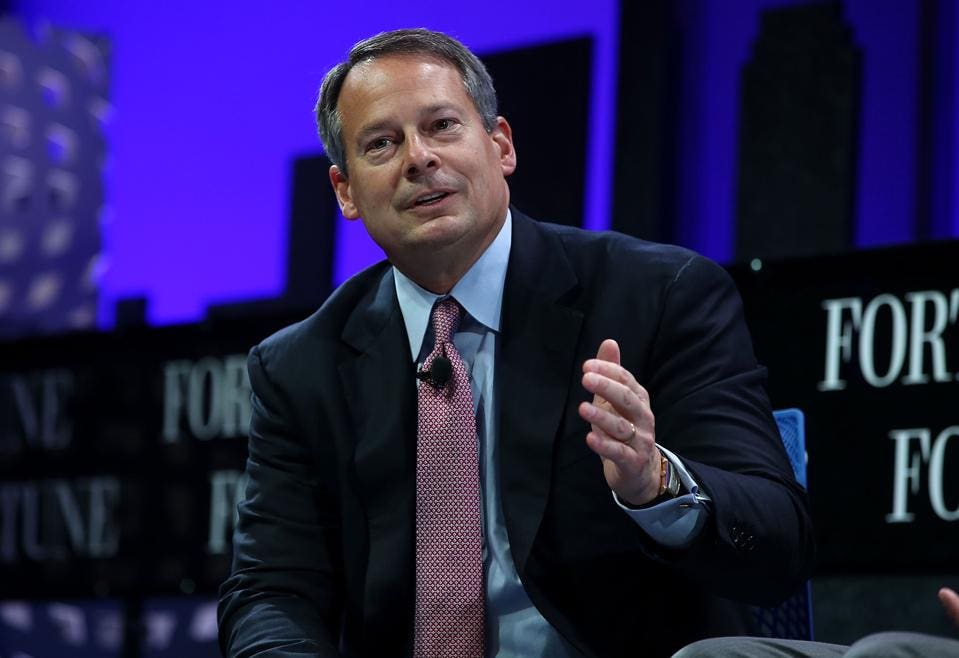 What are the payoffs from being vulnerable?  It can inspire awesome leadership.  For example, in 2017, under Bettinger’s leadership, Charles Schwab topped both the J.D. Power and University of Michigan Customer Satisfaction rankings for all Financial Advisory Companies.   Bettinger is also a Candor All-star, one of a handful of CEOs whose average five-year shareholder letter rankings landed Charles Schwab in the top quartile of my annual Candor Analytics and Executive Tru$t Survey.  These kinds of results are inspired by leaders who are adaptive, authentic and accountable.

Awesome leaders choose to: 1) adapt to the needs of the time by aligning their values with responsible actions; 2) authentically practice candor by separating truth from lies and alternative facts; and 3) are accountable and expect accountability from others.

1. Adapt and align values and actions:  Bettinger learned about aligning his values and actions from his father.  He was 18 when his dad resigned from a tenured chemistry professorship after other professors voted to form a union.  He could no longer work at this university because his colleagues seemed more focused “on themselves than on the students”.  Seeing his dad adapt his life to be true to his value of serving others made a lasting impression.

2. Be authentic and build trust:  Bettinger joined Charles Schwab in 1995 after the firm bought a retirement services company he had founded.  The transition from entrepreneur to executive was not easy.  At his first performance review, Bettinger expected to hear he was doing a great job.  Instead, he learned he would be fired if his performance did not improve.

Tough words to hear, but Bettinger appreciated the honesty.  Later, he used this lesson to remind his managers about the importance of candor.  Twice monthly, they are expected to send him a Brutally Honest Report (BHR) about what is working and not working at the company.  Awesome leaders practice candor to build trust.

3. Choose accountability and integrity:  When hiring people, Bettinger wants to know if they will take responsibility for their greatest failures or blame others.  Being accountable for our choices and outcomes can free us from guilt and lead to greater clarity about future choices.  When we see how the world looks through other people’s eyes, we will be more effective in managing difficult work and life situations.

Bettinger’s leadership skills were tested when he took the CEO reins from Chuck Schwab in 2008 during the financial crisis.  His shareholder letter that year ended with these promises:

“As I close my first letter to our valued stockholders, I’d like to emphasize the things that remain true to Schwab, no matter how stormy the external environment may be.

Our Commitment to Clients: We pledge to deliver premier service, build trusting client relationships, offer competitive pricing, and continue the great Schwab legacy of innovation – both in products and in technology.

Our Commitment to Stockholders: We pledge to be vigilant in terms of risk management and expense controls – treating every dollar of expense as if it came from our own wallet – as we work to enhance stockholder value.

Our Commitment to Employees: We pledge to invest in our people and the resources needed to grow this company for years to come.”

Bettinger kept Schwab accountable and focused on these pledges during the first difficult five years of the crisis up to 2013.  And he didn’t stop.  For the past five years, core net new client assets have grown about 50% and Schwab’s stock has increased 182% compared to 66% for the S&P 500.

Awesome leaders who act with integrity are more likely to be smart risk-takers.  To be adaptive, authentic and accountable means to keep one’s eye on the prize and lead with integrity.  The word “integrity” means to be whole.  To be whole means to care about others, even those who may be different from us.  This leads to awesome empathy – the ability to stand in someone else’s shoes and see what their world looks like.

For Walt Bettinger, it meant learning the name of the woman who cleaned his classroom.